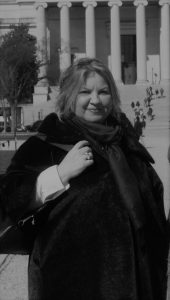 Androniki Oikonomaki studied Classical Philology at the University of Crete (BA and MA) and received her PhD in Classics (Local Alphabets of Archaic and Classical Crete) from the Aristotle University of Thessaloniki. She currently holds the position of Scientific and Laboratory Teaching Staff in the Department of Classics and is a member of the Epigraphy and Papyrology Laboratory of Aristotle University of Thessaloniki, Greece. As a CHS Harvard– AUTH Fellow in Hellenic Studies (2017-18) she worked on the topic of ethnic names in the Homeric epics (Ἀχαιοί, Ἀργεῖοι, Δαναοί: Revisiting the system of denomination of the Greeks in the Homeric epics). She is co-author, with Y. Z. Tzifopoulos, of an introductory book on Greek Epigraphy (Introduction to Greek Epigraphy: From the Eighth century to late antiquity, in Greek, 2016). She is also a contributor to Wiley Blackwell Encyclopedia of Ancient History and has published numerous articles in the field of epigraphy and ancient literacy. She is currently working on a monograph on local alphabets in Archaic and Classical Crete and on the publication of the inscriptions of North Pieria, Macedonia and of Prinias and Azorias, Crete. Her research interests include ancient Greek epigraphy, ancient Greek literature, ancient literacy, and Archaic and Classical history.